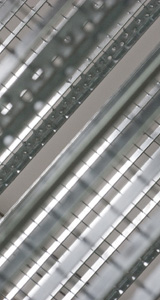 Hydrogen production from biomass: The behavior of impurities over a CO shift unit and a biodiesel scrubber used as a gas treatment stage

Most of the hydrogen produced is derived from fossil fuels. Bioenergy2020+ and TU Wien have been working on hydrogen production from biomass since 2009. A pilot plant for hydrogen production from lignocellulosic feedstock was installed onsite using a fluidized bed biomass gasifier in Güssing, Austria. In this work, the behavior of impurities over the gas conditioning stage was investigated. Stable CO conversion and hydration of sulfur components could be observed. Ammonia, benzene, toluene, xylene (BTX) and sulfur reduction could be measured after the biodiesel scrubber. The results show the possibility of using a commercial Fe/Cr-based CO shift catalyst in impurity-rich gas applications. In addition to hydrogen production, the gas treatment setup seems to also be a promising method for adjusting the H2 to CO ratio for synthesis gas applications.